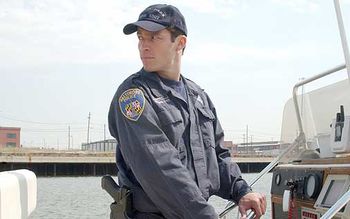 “Ain’t never gonna be what it was.” – Little Big Roy

Our burner message this week is from Brendan – who was liberal with the “C-bomb” and unsure about the state of his marriage! If you want to leave us a burner message use Whatsapp voice memo on our burner phone 📞 +447534 831 658

McNulty is “went where he didn’t want to go” aka harbor patrol with Diggsy. He discovers a corpse “floater” in the harbor and pays back Colonel Rawls by proving City Homicide are responsible for the investigation.

Major Valchek is pissed off when the boss of a local stevedore union named Frank Sobotka donates a more impressive gift to a local church. Sobotka meets with other union leaders and learns that a crucial pier is still in a state of disrepair. Sobotka instructs his nephew Nick to see The Greek regarding payment for a unknown container that he is smuggling through the port.

Later, Port Police Officer “Beadie” Russell stumbles across The Greek’s container and discovers the bodies of over a dozen young women inside.

Theme tune by Sam and Martin from Song by Song Podcast: www.songbysongpodcast.com